It has been a very long road to this release. Not that it is a big release, the only change has been in Beta for almost 8 months. I just didn't get around to releasing it. And when I started to plan for the release, I wanted to do it the right way.

I finally wanted to do some automated tests, so I cover most of the use cases without me having to do most of the clicking around.   So, I started out to write tests in Selenium. But after a lot of struggling, I could not find a satisfying way to automate the login to Gmail. It appears that Google blocks logins through automation tools like Selenium.

Another option was to create a browser profile that manually logs in to Gmail, and then pass that profile to the browser that Selenium starts. However, this did not work consistently, and sometimes Selenium was just not capable to use the profile.   I also tried Playwright but got very similar problems.

In the end, I settled for another browser extension going by the name UI.Vision RPA.   The tests are still not perfect, there are still some steps that have to be done manually, but it is a great time saver that helps ensure I don't forget to test any cases. It has already helped to find two bugs, which led to the migration to manifest v3 for the Chrome and Edge versions of the extension.

As mentioned before, it is a small release. The most significant change is to the playback of audio attachments.

People reported that with previous versions, when they opened some audio files, they just didn't play.   The cause of this is that some of these audio formats are not supported by their browser.

In this release, audio files are now loaded differently. This allows Gmail Mod to detect whether the audio format is supported or not.   When the format is not supported, we can display an error message, so the user knows what is going wrong.   As a side effect, some audio files that didn't work in the past now do work in some browsers.

There is also a change to the interface of the audio player. Instead of opening a complete new tab, the player controls are displayed on the audio attachment. 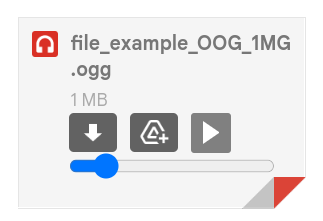 Even though it is a small release, people who get plenty of audio attachments should benefit from this new release.

The release should start rolling out in the coming days. When you have the extension already installed, it should update automatically.   If you don't, the extension is available for Chrome, Edge and Firefox.

Since Gmail Mod broke way back in may 2021, the Beta version of Gmail Mod has been offline.
Now, Beta is back!

The new Beta version has improved handling of audio files. Meaning that some audio files that previously did not play (like voicemail .WAV files) should now play.
Success however depends on the capabilities of your web browser.
However, when you encounter an audio file which is not compatible with your browser you will receive a clear error message.

This change also meant an user interface change to the audio player.
The player controls are now displayed on the attachment, visible when hovering with the mouse over the attachment.

You can try the new Beta version for Chrome, Edge and Firefox

Make sure to send your feedback to [email protected].

About two weeks ago the Gmail Mod broke due to a Browser updates.
It took a bit of time and some thinking outside of the box, or in this case, out of the window.
But this week I published version 2021.0.1 to the different browser extension stores.
For Chrome and Firefox the new version is already available, but Edge users will have to be a bit longer patient because it is still in the review process.

You will notice that the video and audio files now open in a new tab in your browser.
Due to some changes to how extensions work in Chrome I could no longer find a way to embed the video and audio in the Gmail window itself. I hope you understand, but please let me know if you have any other suggestions. Now the most important thing to me was to make it work again as fast as possible.

The new version comes also with a new feature.
You can now also play Google Drive video and audio attachments. This was already a few months in beta but now it is officially available.

Thanks to everyone's support and I hope you enjoy this new release!

Due to a new release of Google Chrome the Gmail Mod extension is broken.

Sadly I don't have much time at the moment to fix it so I temporarily removed the extension from the Chrome Web Store.

Once I fixed it, it will return to the store.

Sorry for the inconvenience.

In previous versions you where only able to play regular audio- and video attachments, attachments from Google Drive where ignored.
With this new Gmail Mod feature, now also video- and audio- files on Google Drive are detected and just like with a regular attachment will get a play button when you hover over them.

You can find the links to the Gmail Mod Beta for your favorite browser below.
Chrome
Firefox
Edge

Make sure to send your feedback to [email protected]

Today Gmail Mod 2020.1.0 has been released.
This new version contains the following changes:

This version is now available in the Chrome Web Store, Firefox Browser Add-ons and the Microsoft Edge Add-ons Store

I hope you enjoy this new release!
Make sure to follow CodeMeteor on Twitter if you want to be informed on the latest CodeMeteor news and upcoming Gmail Mod versions.
And if you want to support this project, you can make a donation on PayPal.

Starting from today, you are able to test Gmail Mod before it is officially released!
It is available for Chrome, Firefox and now also for the Edge browsers.

The Beta version is different from the stable release in that it has the newest features and bug fixes.
It has however not yet been thoroughly tested. So that is where I come to ask your help!

I want to ask as many people as possible, to try and test this new version on the three browsers. And of course report any issues back to [email protected].
I would really appreciate your help!

So, this is what you can expect from the beta version:

You can still play video attachments files straight from the Gmail interface, but aside from .mp4, .ogv and .webm, you will also be able to play video files ending with the .mov extension.

The main new feature is that you are now also able to playback audio attachments.
This works the same way as for video attachments. You open the email, you hover over the attachment and click on the play button.
The audio player supports .wav, .mp3 and .ogg audio files.

And last, but not least there is now also an options menu to enable and disable these two features.

This might be silly for now, but as more features will be added in the future it might be useful to disable feature you don't like or don't care about.

The last thing left for me to tell you is where you can download the extension.

Thank you again for testing, your feedback and your support!

Today we reached over 10000 users on the Chrome Web Store for the Gmail Mod extension!

I like to thank everyone who has downloaded and installed this extensions that lets you play your video attachments inside the Gmail web interface! Not just our Chrome users but also our Firefox users!

And soon, also the Microsoft Edge users can join us!

Within a few days I will also announce what you can expect from the next release.

Gmail Mod the browser extension for Chrome and Firefox that lets you play video attachments straight from the Gmail interface has seen quite a growth in the number of users in the last month, for which I am really gratefully!

However, some user expressed their concerns in respect to their privacy when using this extension.

I understand their concern, because of a lot of extension out there are real security and privacy treads and even some well known and widely used extension have had security breaches.

In order to prevent these kind of problems from happening to Gmail Mod, I have made the source code publicly available on GitLab.
This way, everyone can check the code for security and privacy holes.

Back! More or less…

As I have mentioned previously I had abandoned all CodeMeteor projects to focus fully on my family and projects I am doing around the house.

However, some may have already noticed that I am already spending some time on a new project. Something that started as a quick fix to a problem that a family member had, turned out to be something useful for many people. I am of course talking about the Gmail Mod extension available for Chrome and Firefox. This handy extension will let you watch video attachments straight from within the Gmail interface and more features are coming soon.

However, this does not mean that I am picking up where I left of. I am still giving priority to my family, my job and work that needs to happen around the house.

After that, I am prioritizing support for the Gmail Mod users, and thereafter further development on Gmail Mod. And when there is any time left… we’ll see.

I hope you guys understand and I thank you for your support!

I have been thinking about this for a long time, and I finally decided. I am going to put all the development on the CodeMeteor website and other projects on hold.

I currently just do not have the time to work on any of it and I want to give my family full priority.

Because it will be a few years before I will be able to do some development in my spare time, I decide to stop my web-hosting contract, and only keep the domain name alive. This of course means that all the old information from the website has been removed, but most of it was outdated anyway.